She wrote it back in the 'Fearless' era!

On Wednesday, Taylor Swift released her latest single— the previously unheard track "Mr. Perfectly Fine"! Swift joked about how she's now "writing songs based in fiction to avoid drama," but decided to release the song, which she wrote over a decade ago. Find out who it could be about, and listen to it here!

Taylor Swift has surprised fans once again by releasing a brand-new song "from the vault" unannounced! On Wednesday, Swift dropped the previously unheard track "Mr. Perfectly Fine (Taylor's Version)," and there's already speculation when it comes to who she's singing about!

Swift's latest song "Mr. Perfectly Fine" is one of the six bonus tracks to be featured on the upcoming rerelease of her 2009 album Fearless. Last year, the singer began the process of re-recording her old catalogue of songs, and recently shared that Fearless (Taylor's Version) will be available on April 9.

Her decision to spontaneously drop "Mr. Perfectly Fine" on Wednesday comes just a couple weeks after she released her first song "from the vault". But while the Maren Morris feature "You All Over Me" has a distinctly country sound to it, "Mr. Perfectly Fine" is more of an uptempo, pop track!

Swift took to Twitter to comment on "Mr. Perfectly Fine" when she released it! While she said that she's been "writing songs based in fiction to avoid drama, feeling pretty grown up," she joked that her "2008 music from the vault, in a goblin voice" told her to drop the song!

The internet rumour mill has suggested that "Mr. Perfectly Fine" is about her ex-boyfriend Joe Jonas, who she dated back in 2008. Since the timeline of their relationship lines up with when Swift wrote songs for Fearless, the possibility of Jonas being the song's titular "Mr." is perfectly reasonable!

Not impressed with their new show!

Taylor Swift Calls Out Netflix For Sexism In 'Ginny & Georgia'

Also contributing to the speculation is the fact that Jonas's wife, Sophie Turner, took to her Instagram Story to comment on "Mr. Perfectly Fine"! "It's not NOT a bop," Turner captioned her post. Swift then reposted her comment with a Game of Thrones reference, saying she's "forever bending the knee" to the actress, who played "Sansa Stark" in the hit HBO fantasy series. 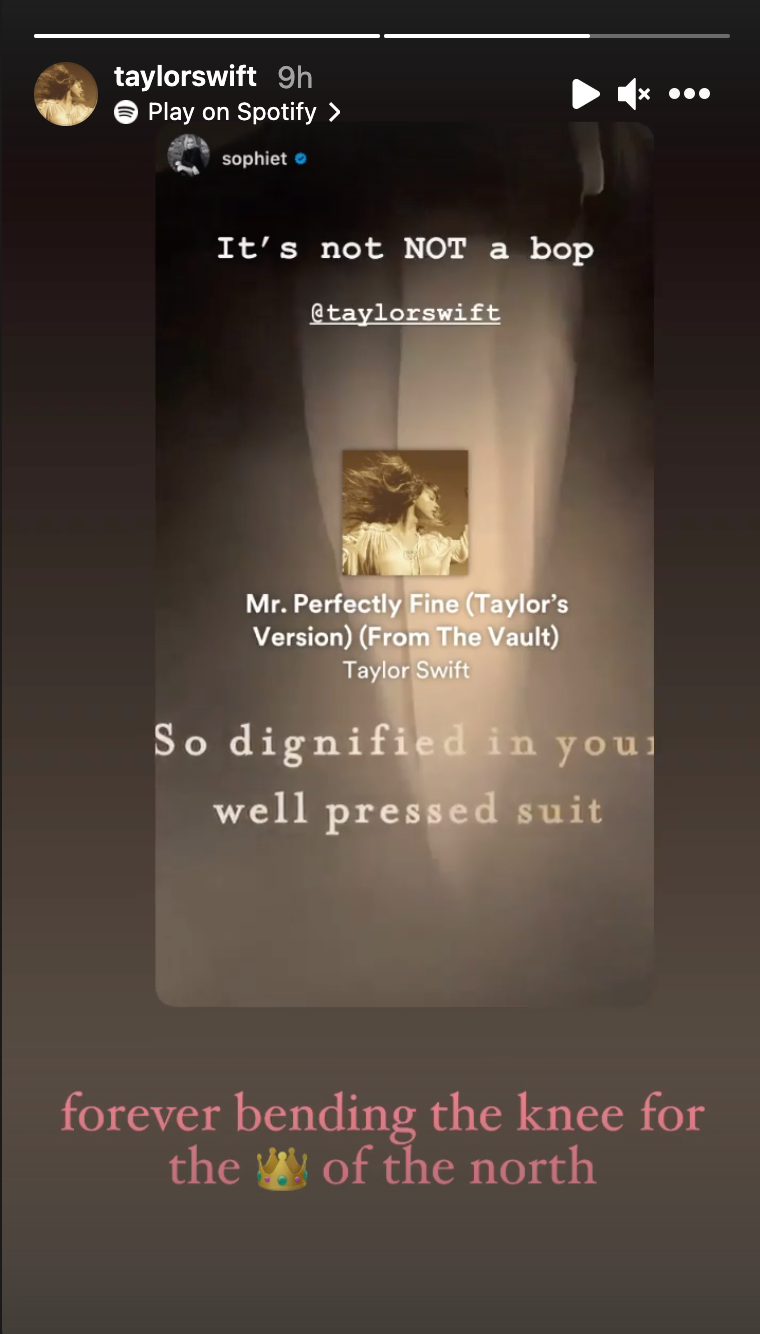 Me in 2020: life is chill, writing songs based in fiction to avoid drama, feeling pretty grown up

My 2008 music from the vault, in a goblin voice: "REELEEEEEEASE MR PERFECTLY FIIIIIIINE" https://t.co/PCexr31q9x

A taste of what's to come!

They've teamed up once again!

A beautiful gesture of support!