On Santa Barbara, "Kelly Capwell" was played by none other than actress Robin Wright. Today, the star is best known for parts in movies such as Forrest Gump and TV's House of Cards. But what did Wright look like in younger days as "Kelly" on the '80s soap opera? Let's take a look back...

On Santa Barbara, "Kelly Capwell" was a main character at the centre of drama on the soap opera. Robin Wright, now 54, was the first actress to play the role of "Kelly" and brought a special charm to the character.

The "Capwells" were just one of the four families that all the storylines revolved around. But "Kelly" was particularly noticeable because of her turbulent love life. The blonde had many relationships, and her choice of men was often problematic.

It's no surprise that Robin Wright turned the heads of men on Santa Barbara as "Kelly." The then 18-year-old was a feast for the eyes with her long blonde hair and delicate facial features.

The actress stayed with the soap opera from 1984 to 1988. And, in those four years, "Kelly" went through a lot. Her first big love, "Joe Perkins," was suspected of murder. When this love broke up, she began a relationship with "Peter Flint," to whom she became engaged. But he turned out to be a serial killer who even killed "Joe," her former love.

The romances for "Kelly" didn't trend upward later on, either. The "Capwell" family member continued to have relationships with rather difficult men throughout her time on the show.

For the former Santa Barbara actress, things only went uphill after her time on the soap. For starters, Wright earned three Emmy nominations for her role as "Kelly." She then achieved worldwide fame soon after with The Princess Bride and her role as "Jenny" in Forrest Gump. 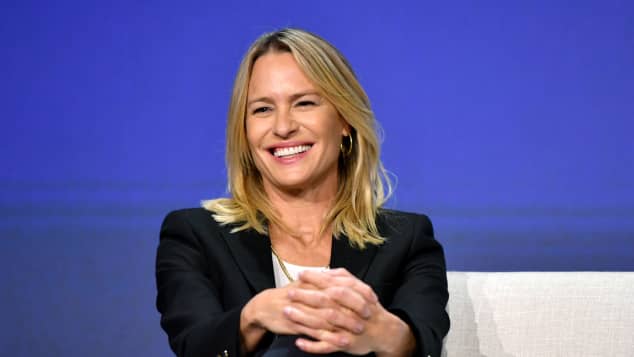 After numerous award nominations, Wright finally emerged with a win in 2014. She won the Golden Globe Award for Best Actress in a Drama Series for her performance in House of Cards. From Santa Barbara as "Kelly" to a ruthless politician: Robin Wright played both roles perfectly.

Wright isn't the only actress to start her career on Santa Barbara. From 1984 to 1993, when the soap aired, the show featured an endless list of cast members, many of whom became well-known names. For more, look back at Leonardo DiCaprio's early acting days on Santa Barbara here.

Celebrity Families: The Most Adorable Pictures

Jennifer Aniston Without Makeup: The Actress Is Truly Stunning