'The Queen's Gambit': This Is How The Netflix Series Ends

Netflix miniseries The Queen's Gambit lasts just seven episodes, ending much too early for its many fans. But how does the story of "Beth" conclude in Episode 7? Is there a happy ending for the gifted chess player? Could there possibly be a sequel? If you haven't watched yet, beware of reading on — spoilers will follow!

The ending of The Queen's Gambit came far too soon for fans of the show, which was a major success in 2020. The plot of the Netflix miniseries revolves around "Beth Harmon" (Anya Taylor-Joy), who grows up in an orphanage and, at age 8, is taught the game of chess by caretaker "Mr. Shaibel" (Bill Camp).

"Beth" turns out to be talented and over the years becomes a chess prodigy. However, as she ages, she also develops an addiction from medication distributed irresponsibly at the orphanage. But "Beth" competes in chess tournaments as a teenager and asserts herself against mostly male opponents.

The Queen's Gambit ends with a final chess match. "Beth" has a goal to beat the international chess star "Vasily Borgov" (Marcin Dorocinski), which would make her no. 1 in the competition worldwide. However, "Beth" destroys her first chance with a night of partying.

The first meeting of the two takes place in Paris. Addiction problems catch up with "Beth" and she's unfit for the important game the next day. In the final episode, she rethinks her actions and becomes aware of her struggle with addictive substances.

She travels to Moscow—this time of sound mind—to face the great opponent "Borgov" again. After a long and nerve-wracking match, "Beth" finally succeeds: She defeats him and becomes the world's top chess player.

Based on a Vladimir Nabokov novel

Chess accompanies The Queen's Gambit through the finale

"Beth" finds her happy ending in The Queen's Gambit when she is finally at peace with herself and begins to work through demons of her past. But where is "Beth" going after she finally reaches the top?

The series closes with its main theme: chess. "Beth" is walking through a park in Moscow and meets several older men who congratulate her on her achievement. Finally, she gets involved in a game of chess with one of the men — a coda reminiscent of when "Beth" first competed at chess with "Mr. Shaibel."

Will there be a Queen's Gambit season 2?

The Queen's Gambit has a solid conclusion — though whether "Beth" stays in Russia or travels back to America remains unclear. And despite the show's record-breaking success on Netflix, a second season currently appears unlikely. 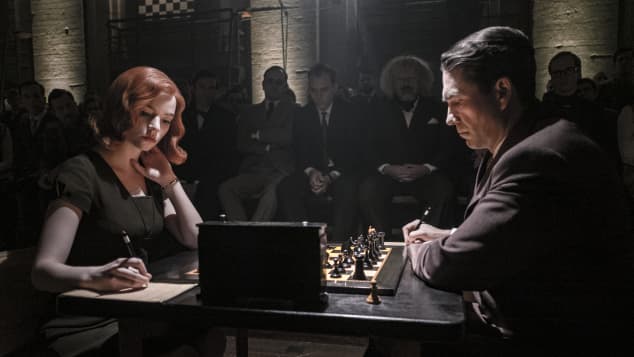 The source novel for the series is finished and since the author Walter Tevis (†56) has passed away, there will be no official second part. In addition, Netflix intended The Queen's Gambit to be a standalone, single-season miniseries from the start.

For more, meet the cast of the series in real life here.

'Karate Kid' stars are on board

A Tribute to Some "Dump Month" Survivors

January Movie Releases That Were Successful