"Travis and I are broken and devastated"

Kylie Jenner has released a statement following the deadly incident at her partner Travis Scott's music festival on Friday. Kylie said that she and Travis "are broken and devastated" by the tragedy, and she also defended Scott's role in the fatal crowd crush.

Kylie Jenner has spoken out following the tragic events at the Astroworld Festival. Jenner's partner Travis Scott was performing at his music festival when a fatal stampede occurred, leading to eight deaths and hundreds of injuries in the crowd.

Jenner, who was in attendance during the deadly incident, wrote on her Instagram story today: "Travis and I are broken and devastated.

"My thoughts and prayers are with all who lost their lives, were injured or affected in anyway by yesterday's events," she continued. "And also for Travis who I know cares deeply for his fans and the Houston community."

The occurrence is still under investigation, but Scott has been attracting criticism for continuing to perform during and after the incident, and for his history of neglecting crowd safety at his shows. On this subject, Jenner wrote:

"I want to make it clear we weren't aware of any fatalities until the news came out after the show and in no world would have continued filming or performing."

She concluded: "I am sending my deepest condolences to all the families during this difficult time and will be praying for the healing of everyone who has been impacted." 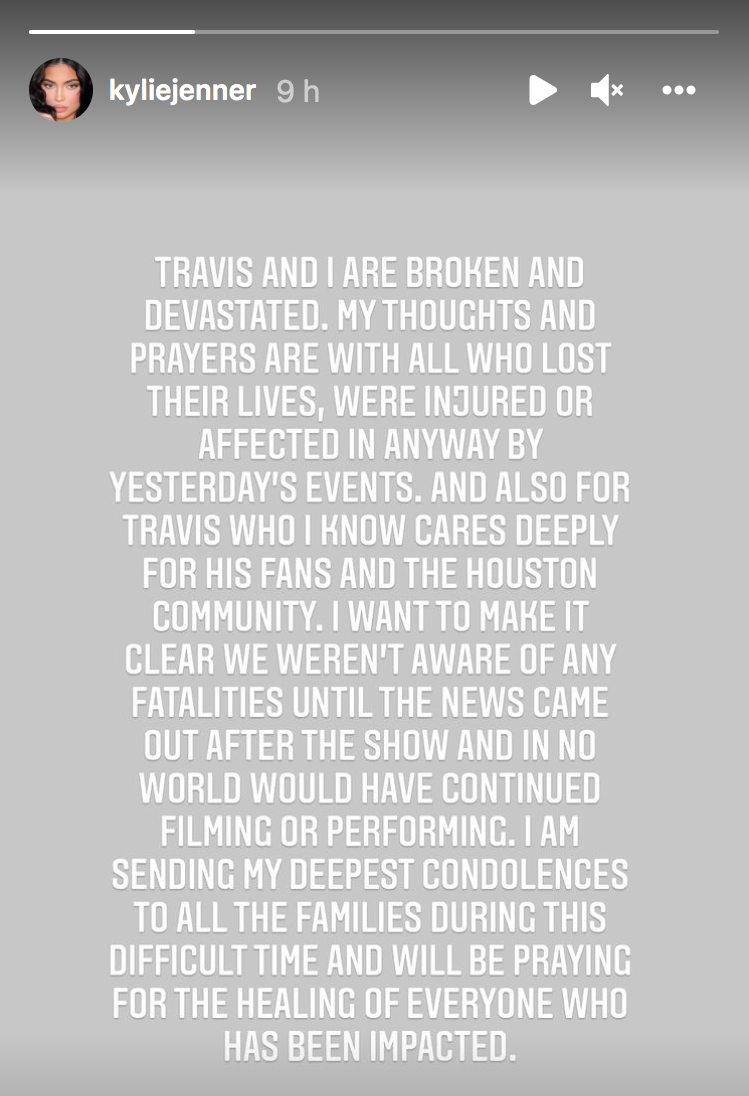 According to several reports, the cause of the fatal stampede is still being investigated, as are the causes of death for the eight victims and a rumour (via TMZ) that a man may have been injecting concertgoers with an unknown substance in a needle.