Everyone recognizes Michael Peña's lovable face! From Crash and Ant-Man to End of Watch and Narcos: Mexico, Michael Peña has an impressive filmography. Meet his gorgeous wife Brie Shaffer.

Michael Peña has worked hard to become one of the most recognizable faces in Hollywood. He can play fun character actors like in Ant-Man or Battle Los Angeles and also characters with impressive depth like in End of Watch and Crash. He is much different than the characters he portrays, but there is a lot of his family history embedded in the films he stars in. His mother was born in San Luis Potosí and his father in Jalisco, Mexico, and both left home in the 1970s and immigrated to Chicago.

He says that this situation became so common that he repeatedly promised his mother that the day would come when he would not be just any ruffian, but the leader of a gang. Over time he managed to participate in different projects until he got the attention of critics and the public with his role in the award-winning film Crash, which earned him award nominations and the appreciation of many within the Hispanic community in the United States for showing a more real side of the Latino community.

In 2006 Michael married actress, poet, and screenwriter Brie Shaffer. The artist has directed three films and acted in various TV series for the FOX network. In 2008, the couple had their first child, Roman Joel Peña. Michael even tattooed his chest with the name of his first-born. He told Entertainment Tonight that his fatherhood affected his performance as DEA agent "Kiki Camarena" in Narcos: Mexico in a profound way. 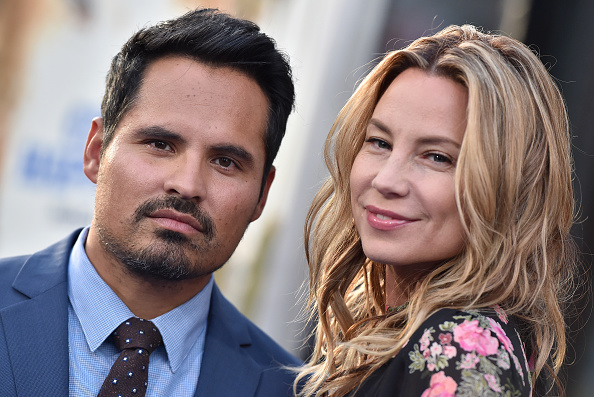 Michael Peña and his wife Brie Shaffer arrive at the premiere of CHIPS at TCL Chinese Theater on March 20, 2017 in Hollywood, California.

"Kiki" was also a father and was entrenched in dangerous waters, and after speaking with "Kiki's" real-life widow Mika he realized fatherhood made him and "Kiki" more cautious. "You get the feeling of potential loss like you don't want your kids to grow up without a parent. So, you sort of take that into consideration whenever you're close to danger or whatnot. That's what I would think of when I was playing certain parts or certain scenes is that think of the big picture and is it worth it."

Leah Remini Says 'Scientology and the Aftermath' Finale Is Only "The beginning"!

Michael and Brie are members of Scientology, so Brie is somewhat private about her personal life due to the problematic history of the Church of Scientology but luckily Michael shares a bit of his family life and love on social media. The two have an absolutely gorgeous little family.

We can't wait to see whatever Michael is a part of next!

Happy Mother's Day to you Brie and all of the mothers out there. We are nothing without you.

These Movies Make Us Cry Every Time