Part of his lung was removed!

Lady Gaga's dog walker Ryan Fischer bravely did his best to protect her puppies from dognappers who shot him point-blank in the chest! Now, a month later he is finally out of the woods and can go home.

Heroic and dedicated Ryan Fischer was hospitalized after being shot in the chest during the vicious dognapping last month. Ryan posted a video to his Instagram story set to Carly Simon's "Coming Around Again" where we can see him getting dressed and prepared to leave the hospital. The video is emotional as you watch him struggle through the pain to simply put his clothes on and you can see his countless badges and scars as he dances to the music.

He wrote the story of his recovery battle explaining, "my lung had collapsed, and air was filling up my chest cavity. Along with accepting the news that I was about to be readmitted, several nurses and doctors told me how they had been in the room when I came in with my gunshot. How they didn't think I was going to make it." 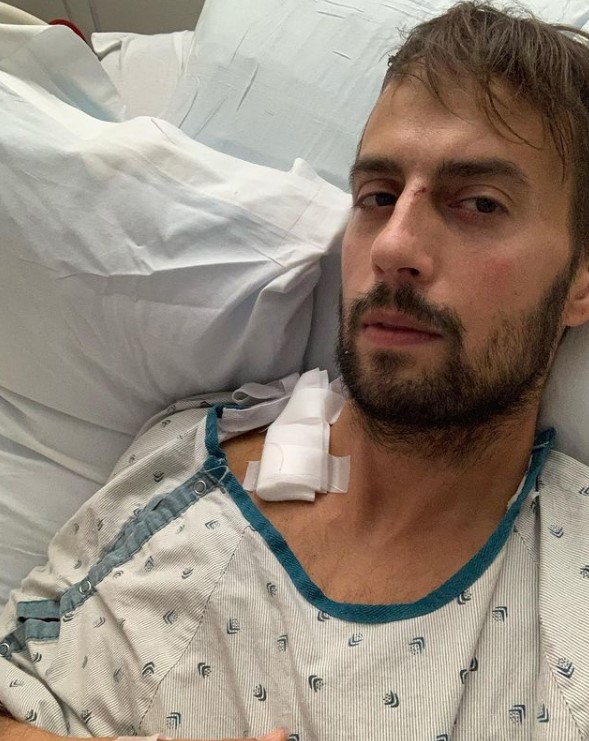 "My mind transported me to that night when I was evaluating the shock and concern on their faces as blood spurted out of me on to them, the table, and floor (and I tried to bring levity to the situation by making jokes and obvious statements like, 'Well that doesn't look good,' as they raced around attempting to stabilize me), but to hear them actually say it..."

Ryan's lung continued to collapse and fail to the point the doctors had to remove a part of it because "It became quite clear that my lung was not healing, and the bullet wound had scarred my tissue like a burn."

The grooming expert in 'Queer Eye'!

Through all this trauma, Ryan is able to look at life through a whole new lens and has maintained his positivity: "The journey is hard, it's assuredly painful, and questionable choices that no longer serve me like wearing skinny jeans are made. But I try. And somewhere within that I find the absurdity and wonder and beauty this life offers us all."

Luckily, Ryan had been able to save Lady Gaga's pup Asia while Koji and Gustavo were found unharmed. According to TMZ, Lady Gaga had offered $500k for the safe return of her pups but the police informed her to hold onto the reward money until the woman was cleared and they could be sure she had nothing to do with the violent kidnapping.

The Truth Of Mental Illness

Lady Gaga Opens Up About Depression

Here's how he really feels!

What are the names of the brothers in the British band Oasis??