Some may have been offended...

On Monday, Billie Eilish participated in a viral Instagram challenge, and found herself losing thousands of followers over a photo she shared! Eilish posted a picture of some sketches she'd done of the female anatomy, and seemed to be entertained by the fact it had offended some people. Get the details here!

Billie Eilish appears to have lost quite a few followers on social media lately after she shared some drawings she'd done of the female anatomy! As ET Canada shares, Eilish posted photos of the art in question to her Instagram Story on Monday, and thousands of people seem to have unfollowed her afterwards!

Eilish participates in "post a pic of" challenge: "I love boobs"

Eilish shared her drawings as part of a viral game that's currently going around Instagram! The "post a picture of..." challenge sees people encourage their followers to send them a prompt to share photos (and in some cases, videos) they want to see. "Your Lock Screen," "a video you can't explain," and "Unseen picture of you" are some of the other prompts that Eilish received.

When a fan sent in a request for Eilish to share "a drawing you're really proud of," she decided to post a photo of the controversial drawings! "these probably lol i love boobs," the "Therefore I Am" singer wrote alongside the pencil sketches, which feature various parts of the female anatomy. Notably, the photo she shared of her lock screen also revealed a green-tinted photo of two nude women.

Billie Eilish revealed she considered taking her own life: "I was so unhappy"
(© Getty Images)

Eilish reposts fan as she laughs at follower count dropping

Eilish's freedom of expression in her art seems to have cost her some social media followers though! That's because as ET Canada shares, one of Eilish's fans pointed out that she had dropped from having 73 million followers to 72.9 million followers after sharing the drawings.

Instead of apologizing for possibly having offended a large number of followers though, Eilish continued with the Instagram Story challenge and shared a fan's post about the incident! "LMFAOOO y'all babies smh," she wrote above a screenshot comparing the two follower counts, alongside a couple skull emojis.

This isn't the first time that Eilish has been involved in a controversy involving the female body! Back in May, the "all i wanted" singer released a short film in response to criticism from bodyshamers, which saw her making a powerful statement to the world about having ownership of her body. 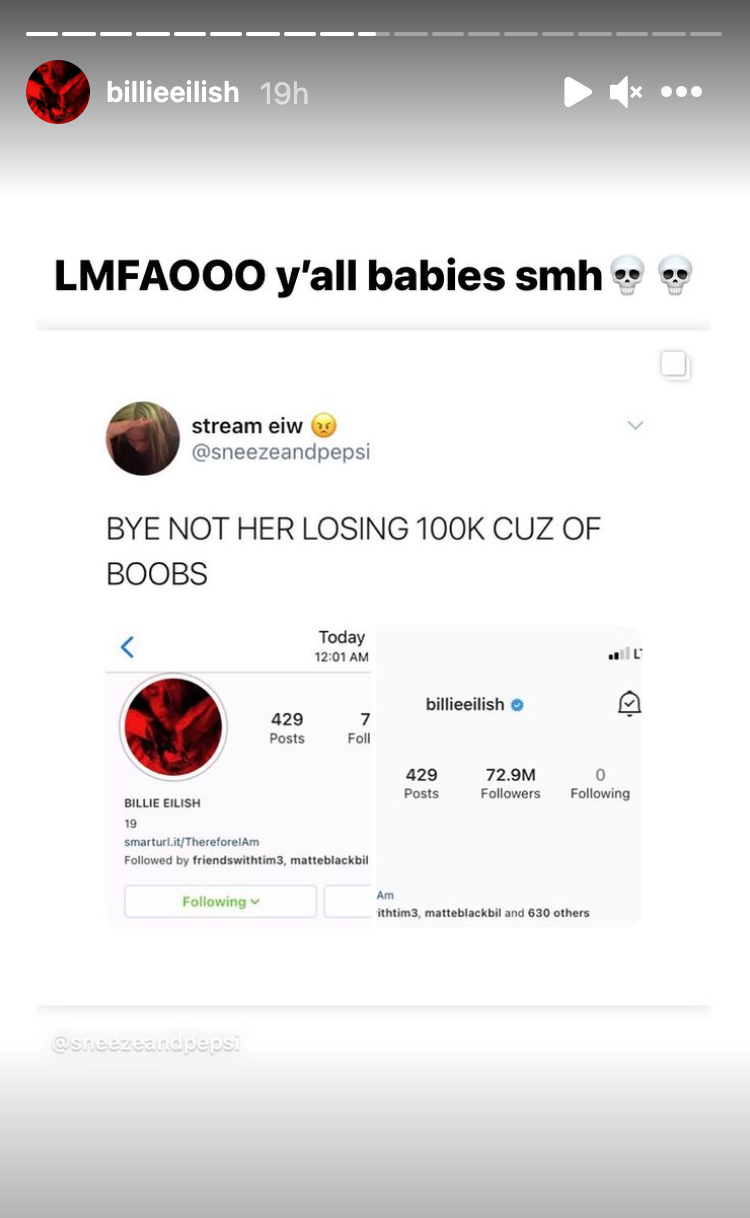 Live From Their Living Room!

A shift in perspective!

Billie Eilish Talks To Her Dad About Her Views On Religion