Prince Harry and his brother Prince William have helped pave the way to normalize the importance of mental health and now Harry is sharing his experience. The Duke of Sussex truly laid it all out there and has inspired countless viewers.

Prince Harry and Oprah Winfrey have just released their series on Apple TV+ titled The Me You Can't See and in it, the Duke of Sussex really bared his heart and soul.

Harry has been opening up about dealing with his past trauma with therapy, coping mechanisms, and standing up for himself in hopes of helping others feel more comfortable to do the same. In doing this he revealed some major bombshells.

Harry told Oprah just how difficult his anxiety became. He explained that he suffered extreme panic attacks where "I would just start sweating. I would feel as though my body temperature was two or three degrees warmer than everybody else in the room. I would convince myself that my face was bright red and therefore everybody could see how I was feeling, but no one would know why, so it was embarrassing."

"You get in your head about it and then you're just like, 'Everybody's looking at me.' One bead of sweat feels like the whole face is pouring down. Just sweating, and then just all in my head going, 'This is so embarrassing. What are they thinking of me? They have no idea. I can't tell them.'"

Prince Harry gets emotional while telling the story about how he found out Meghan was expecting baby Archie at the Well Child Awards.
(© Getty Images)

"The happiest time of my life was the 10 years in the Army" because he received no special treatment and was regarded as just another soldier.

The Royal Family and The Firm Ignored Harry's Pleas For Help

Harry explained that despite his and Meghan's struggles the pair attempted to continue working and putting on a brave face. Even when it became deadly serious and Meghan was on the brink of suicide, the Royals chose to sweep Harry's requests for help under the rug.

He explained, "I thought my family would help, but every single ask, request, warning, whatever it is, just got met with total silence, total neglect. We spent four years trying to make it work. We did everything that we possibly could to stay there [in London] and carry on doing the role and doing the job. But Meghan was struggling."

The Duke and Duchess of Sussex attend an event at Canada House in London, UK to mark Commonwealth Day on March 11th, 2019.
(© imago images / Matrix)

He had received this treatment from the Royal family and the firm even before Meghan was in his life. He recalled, "Towards my late 20s, everything became really hectic for me. To the point of exhaustion, I was traveling all over the place because from my family's perspective, I guess I was the person who was, like, 'We need somebody to go there. Nepal, Harry. You go.' I was always the yes man. I was always one who didn't say yes, but then yes, yes, of course. Yes. Yes, yes, led to burnout."

Harry began to feel "panic attacks [and] severe anxiety" during his Royal duties and still felt a lot of pain about losing his mother as a child and wanted to let it out. But being a Royal, "I wasn't in an environment where it was encouraged to talk about it either. That was sort of, like, squashed."

"Family members have said just play the game and your life will be easier. But I have a hell of a lot of my mum in me. I feel as though I am outside of the system but I'm still stuck there. The only way to free yourself and break out to tell the truth."

It was the neglect of his wife by his own family and the firm that was one of the "biggest reasons" Harry decided to leave.

"That feeling of being trapped within the family, there was no option to leave. Eventually when I made that decision for my family, I was still told, 'You can't do this', And it's like, 'Well how bad does it have to get until I am allowed to do this?' She was going to end her life. It shouldn't have to get to that."

Harry Sought Therapy After a Fight With Meghan Markle

The Duke of Sussex explained that while he and his now-wife Meghan Markle were dating the pair had an argument that led to his breakthrough with therapy.

He said, "I saw GPs. I saw doctors. I saw therapists. I saw alternative therapists. I saw all sorts of people, but it was meeting and being with Meghan. I knew that if I didn't do the therapy and fix myself that I was going to lose this woman who I could see spending the rest of my life with."

"When she said, 'I think you need to see someone,' it was in reaction to an argument that we had. And in that argument not knowing about it, I reverted back to 12-year-old Harry. The moment I started therapy, it was probably within my second session, my therapist turned around to me and said that sounds like you're reverting to 12-year-old Harry. 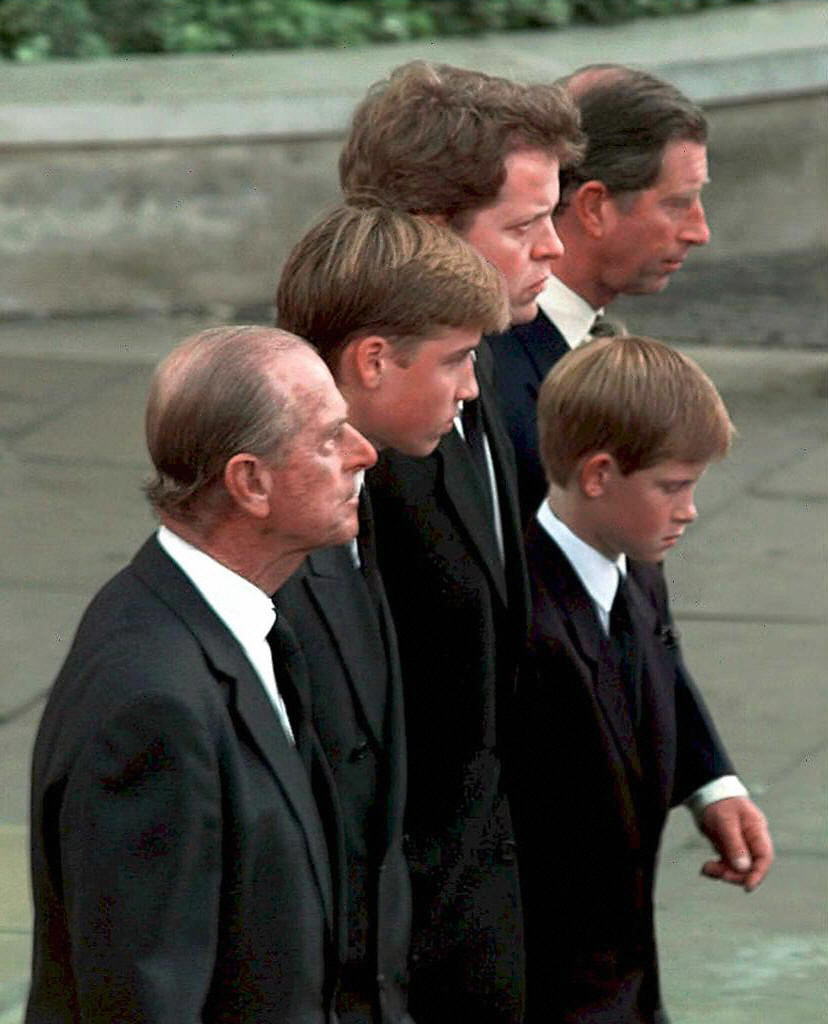 Prince Philip, Prince William, Earl Spencer, Diana's brother, Prince Harry, and Prince Charles walk together behind the carriage carrying the casket of Princess Diana in London on its way to the funeral at Westminster Abbey, 06 September.
(© Getty Images)

"I felt somewhat ashamed and defensive. Like, 'How dare you? You're calling me a child.' And she goes, 'No, I'm not calling you a child. I'm expressing sympathy and empathy for you for what happened to you when you were a child. You never processed it. You were never allowed to talk about it and all of a sudden now it's coming up in different ways as projection.' That was the start of a learning journey for me. I became aware that I'd been living in a bubble within this family, within this institution and I was sort of almost trapped in a thought process or a mindset."

Being able to finally understand himself and take better care of himself was shocking, "it was like someone had taken the lid off. All of the emotions that I had suppressed for so many years suddenly came to the forefront."

When Prince Charles was younger he used to be more open with how difficult his childhood was and the deep impact it had on him. "That doesn't make sense. Just because you suffered doesn't mean that your kids have to suffer, in fact quite the opposite. If you suffered, do everything you can to make sure that whatever negative experiences you had, that you can make it right for your kids."

The strong father of Archie Mountbatten-Windsor is fiercely protective of his son and soon-to-be daughter and will do his best to make sure the same damage done to him and his father will be done to them. "We chose to put our mental health first. That's what we're doing. And that's what we will continue to do. Isn't this all about breaking the cycle? Isn't it all about making sure that history doesn't repeat itself? That whatever pain and suffering has happened to you, that you don't pass on."

Before the tell-all Oprah with Meghan and Harry interview was set to air, the firm seemingly collaborated with the UK media to put Meghan in a horribly bad light and seems to manifest odd complaints at a suspicious time. Because of this, Harry woke up in the middle of the night before the interview aired to find his wife crying into her pillow.

She was overwhelmed by the "combined effort of the firm and the media to smear her." He explained, "I was woken up in the middle of the night to her crying in her pillow because she doesn't want to wake me up because I'm already carrying too much. That's heartbreaking. I held her, we talked, she cried, and she cried, and she cried."

The pair knew they were going to face much backlash for the interview but knew it was important to share their truth. Harry said the interview "was about being real, being authentic and hopefully sharing an experience that we know is incredibly relatable to a lot of people around the world despite our unique privileged position."

It was before this interview that the firm allegedly quickly leaked claims that a former assistant of Meghan's complained of bullying from the Duchess. Meghan denied the allegations while Buckingham Palace released a statement saying they were going to investigate the allegations.

It was this action that reignited the anger surrounding Prince Andrew's connections to convicted sex offender and trafficker Jeffrey Epstein. The public and many major UK media outlets were up in arms that Meghan's bullying claim was important enough to be investigated by the Palace but Andrew's dodging of the FBI and criminal associations were not.

September 5, 2020, London, United Kingdom: Save Our Children protesters of cover up of Prince Andrew's involvement with Jeffrey Epstein and sex with underage girls and were calling for Prince Andrews's arrest.
(© IMAGO / ZUMA Wire)

The Prince is finally proud and strong enough to share his story and mental health journey and encourage others who are struggling to reach out for help. Prince Harry explained to viewers that "To make that decision to receive help is not a sign of weakness, in today's world, more than ever, it is a sign of strength."

What will be coming to light?

When was Prince Harry Born??